skip to main | skip to sidebar

Posted by Hotseat | Labels: arrested development, comedy, yessss
Words fail me now... as this is like kissing God 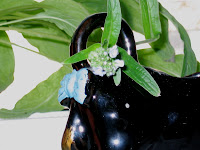 In an effort to get better at things that I wasn't previously good at, I picked up a kit at the Ladybug Florist that let me grow a forget-me-not plant from seed. Well, it sprouted, and I treated it ever so gingerly, and it continued to grow (SFW.) I then was forced to transplant it, and I went back to Ladybug for advice. (They laughed at me as though I was asking about which way to hold up a book.) So, I transplanted it and eargerly awaited blooms. It grew and grew, and I was poised for it's flowering magesty, which, I was convinced would be coming at any moment. Dre would ask me DAILY the flower status, and for months it never came. Imagine my Gobsmackery when on Wednesday of last week, I was looking out the window to see which car's alarm was going off, and I saw something unusual. Something clustery and green, not leafy. Well, as you can see, my forget me not,which I raised from a seed with my formerly "brown thumb" (a/k/a cut flowers only) has bloomed! SUCK IT, NATURE!

Ahhhh, pseudo Mezzican food. I am working right now at a place across the street from the famed Burrito Boyz burrito stand. As such, it is a reguar haunt for my workmates, who have a system in place to answer the nagging question, "which burrito do I choose?" (Initially posed by Rene Descartes, I believe.) Here it is. I particularly love the "beep beep boop" noises.

Nostalgitude Special Edition: Postcard from beyond...

I visited the family this weekend and on a trip out with my mother, we bumped into this woman who lives next door to the house in which my late Grandfather used to live. She told my mother she had a package for her. It seems that the new owners of the house have decided to renovate, and removed the old gas range (classical midcentury design if there ever was such) in favour of new fixtures. SFW? I'll tell you SFW... they found postcards and letters which had fallen behind the oven. Among them is this gem... in keeping with my Great Aunt Gladys and my Grandmothers' bad taste. Click the thumbnail for larger version.

Nostalgitude Special Edition: Postcard from beyond...

To every thing, turn, turn, turn. There was once a time at the evil empire when Ryan and I used to amuse ourselves when we had a free moment. One afternoon, we nearly pissed our pants over this gem which stays in our hearts and lexicon today. Bubb, we'se onna pour out a fo'ty on the curb for y'alls.

I feel like I'm repeating my sentiments about Rescue Me coming back (which wasn't borne out in practise. This season is meh.) but Sweet BJ and the Os! Weeds is coming back! And this time, it's for realz and for serious! Last season's cliffhanger featured a 3 way drug deal gone bad, a dead husband/DEA agent, a son on the run with purloined weed pulled over by Agrestic police, and another son on the run heading to "Pittsburgh" with a brilliantly batshit crazy Zooey Deschanel. That's about as cliffhangy as it gets. Well, I can reveal (having seen the first 3 episodes, which begin airing on Showtime on August 13 at 10 pm, that there is an even more gripping turn of events for each of the plot points listed previously. Things remain murky, but still twist and turn and move forward for these episodes. It's absolutely a top pick for this summer, running neck and neck with the equally twisty Big Love. Below is the promo for this year's season.

I love language, as you'll know from this post, but when I came across this prose, I had to show it off as a great example of WTF:

"With physical Mars now in earthy Taurus, as he receives a blast from Uranus the Awakener, you Goats are primed and ready for action."

Proofreading is your friend. People expect horoscopes to be kooky (I keep this on my iGoogle just for Esses and Gees) but this may be a bridge too far.

Sweet Baby Jesus and the Orphans! The State is coming to DVD

Posted by Hotseat | Labels: Sweet BJ and the Os, teevitude

Sweet Baby Jesus and the Orphans! The State is coming to DVD! If you like Reno 911, Stella, The Wet Hot American Summer, and countless more tengentially connected shows and film you will love THE STATE. To put it succinctly, it was in the pantheon of killer shows that didn't last such as Arrested Development and Mr Show. It was the show too cool for the US's coolest network, MTV, and took every chance it had to take the piss. Here's the DVD announcement from David Wain's myspace

Sweet Baby Jesus and the Orphans! The State is coming to DVD

I tend to have certain rituals in life, probably due to being raised in an highly organised OCD house. One such ritual that forms today's nostalgitude entry is Star Trek: The Animated Series. At one time, Teletoon was a ramshackle group of cheap animation, and this, in a manner of speaking, was its flagship. Dre and I used to watch it every Friday night before going out to the club. Now I am not a Trekkie, nor am I here to harsh on Trekkies. I am here to vouch for something which is integral in all great works of art: the medium must suit the subject matter. I hereby put forth that this medium was the perfect one for the subject matter.

For one delightful year, Filmation studios put forth an animated version of the series using all the original actors. Some of the best-loved storylines are reworked in this half hour series. Everyone is well aware of the camp of the original, which has been lampooned to death, but somehow the animated version just works. The storytelling is tighter, the voice work is better than the onscreen presence of some of the iconic actors, and the fantasy seems more plausible. Perhaps it doesn't believe its own hype, and that's something it has over the original. Here's part one of a classic episode. Others are a google away.