skip to main | skip to sidebar

Last week, a group of peeps rolled up to the Delta Bingo in Downsview for what we thought was a night of BIG MONEY. What happened instead was a cautionary tale worthy of Degrassi.

We bought some double strip mess on the advice of the chick in he office. We were chastised for "dabbing too loudly." And received many a hairy eyeball for "giggling." 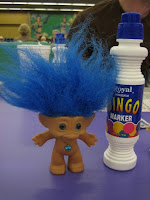 Later, we tried some of the cuisine. The special was Liver'n'Onions, but no one was brave enough. Instead, a few rounds of chicken fingers were bought. No one got salmonella!

Later, they announced the score of the Stanley Cup Game.

Later still, J-M won! 20 dollhairs. He is well on his way to building a fortune.

Then, it went all pear-shaped. The woman who yelled at us for our dabbing technique won 3 gs. Then, in reference to a dollar store pregnancy test that was discovered on the trip to get the dabbers, we held an open forum on "how much pregnant lady urine a man would have to drink to trip a dollar store pregnancy test?" If anyone knows, please drop us a line.
Also of note is this delightful rendition of "Michaelangelo" from TMNT that was done by J-M in bingo dabber. I would say it captures a moment quite well.

Hello!
Very good posting.
Thank you - Have a good day!!!

How much you got?